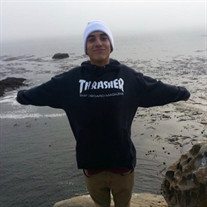 Zackary Todd Leard passed away unexpectedly in his sleep on December 7, 2019 in Folsom, California. Zackary was born on March 29, 1996 in Folsom, California and grew up in greater Sacramento area. Zackary was born with an innate talent … he was an artist! His talents took him to Chicago and New York where he participated in many art shows. After traveling the United Sates, he returned home to be close to his family. Not only was Zackary passionate about his art, but he found great joy in aspiring and motivating others to be creative. On any given day, you could find Zackary in his studio creating, talking to neighbors as they passed by, or hanging out with his friends and family. Zackary’s other passion was playing video games and listening to music with his brother Noah. The two of them loved to spend time together even if it meant Noah watching Zackary play Kingdom Hearts for hours on end. Zackary is survived by his mother, Bianca Leard (Carlos Galvan), and his father, Michael Leard (Marcella Benton); his brother, Noah Leard; his aunt, Natasha Hudson (Finn Kealoha); his grandparents, Diana & Steve Giambrone, Angie & Jim Hudson, Leilani & the late Bill Pecher, and Jennifer & Greg Leard; many beloved aunts, uncles and cousins; his girlfriend, Cristal Martinez; best friends, Zach Owens, Jonathan Cruz and many others. A memorial service will be held for Zackary on Sunday, December 15, 2019 at 11:00 am at the Green Valley Mortuary in Folsom, CA. Following the service, friends will be invited to share memories at Zackary’s grandparents home in Folsom, CA.

The family of Zackary Todd Leard created this Life Tributes page to make it easy to share your memories.

Zackary Todd Leard passed away unexpectedly in his sleep on December...